Published On: May 9th, 2022Categories: History

Clover Hill Estate is located within the suburb of Calderwood in the City of Shellharbour.  Shellharbour was declared a Municipality in 1859 but European settlement of the area occurred well in advance of that date.  To Europeans, it was “an appealing landscape of rolling hills clothed with emerald pastures and luscious meadow flats hemmed in on the east by the rugged coast and on the west by the towering escarpment. The foothills of the Macquarie Ranges were still enclosed by cedar forests melting into the enfolding rainforest and on the flats, the cabbage palms reared their unruly heads against a sky of piercing blue”.

In 1816 Governor Macquarie ordered Surveyor-General Oxley to meet with the cattlemen grazing their herds in the Illawarra for the purposes of negotiating free land grants around Tom Thumb Lagoon, Lake Illawarra and around Macquarie Rivulet.  Notable amongst these were grants for Samuel Terry, Thomas Hobby and David Johnston. When Macquarie visited the Illawarra in January 1822 he travelled as far south as the river named in his honour in 1816 and visited Johnston’s farm, known variously as Johnston’s Meadows and Macquarie’s Gift on the rich northern flats of Macquarie River which later became the land at “Clover Hill Estate” below.  Mt Johnston or Johnston’s Spur is located immediately to the north of the estate. 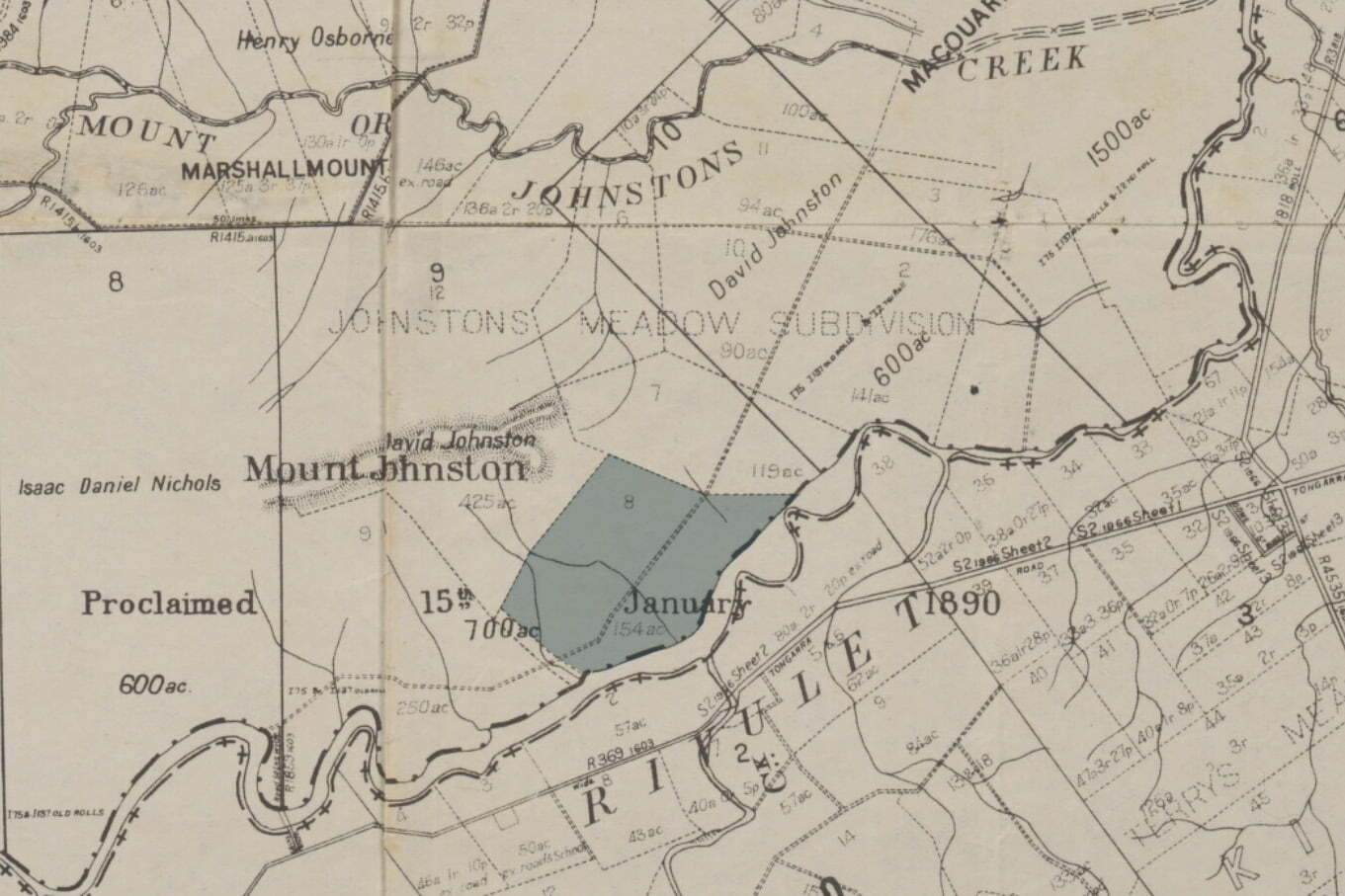 Parish of Calderwood, County of Camden Showing Johnston’s Meadow Subdivision which was later subdivided into “Clover Hill Estate” (shaded area in the centre)

The early settlers had for the most part, cleared the Illawarra area with the assistance of convict labour.  All breeds, types and colours of cattle had been introduced into the area.  Cattle grants from Government and private herds reached the Illawarra.  These included Longhorn Durhams, Shorthorn Durhams, Red Lincolns, Red Ayrshires and Jerseys.  However, three members of the Osborne family from Northern Ireland had, since 1829, laid the foundations of a dairy industry, and in doing so, the evolution of the breed the Australian Illawarras.  The Osbornes imported the best cattle, promoted the first Agricultural Show at Wollongong, and encouraged others in forming a dairy industry.

The Australian and Californian gold rushes provided the impetus for an expansion of the industry and the Illawarra area took up the demand for butter and other dairy products, and dairy has remained an important Illawarra industry ever since.

The Illawarra breeders were credited with having a flair for stockbreeding and an “eye for a good beast”. The 1860s saw the increased recording of breeding details and facts, which noted the importation of several outstanding bulls bought to suit the environment.  In 1898 the embargo was lifted allowing a fresh wave of cattle imports.  Breeders introduced Jersey, Guernsey, Kerri Dexter, Friesian, Shorthorn and Ayrshire bloodlines and it was from this amalgamation that the Australian Illawarra dairy cattle descended.

One Ayrshire bull, from Victoria, named “The Earl of Beaconsfield” proved outstanding when mated with cattle of the Illawarra. The progeny was magnificent and amongst the most celebrated was a cow called “Honeycomb”. Claimed to be Champion Dairy Cow of the world in the early nineties, she was also invincible in the show ring and winner of all the milk and butterfat awards. This was the cow that inspired the Illawarra’s, and the breeding programs began revolving around Red and Roan Shorthorns and Ayrshire bulls. Studs became more prevalent and spread to many other parts of Australia including Queensland.

Now the term Illawarra is commonplace, and the Society is called The Illawarra Cattle Society of Australia.  The “Shorthorn” was dropped from the name because it caused confusion to some overseas buyers, who associate Shorthorn with dual-purpose animals.  International recognition has consolidated the breed worldwide.”

The developers of Clover Hill Estate have not only recognised the importance of the agricultural history but also decided to name the four streets in the estate after famous and important dairy cows from Albion Park that were awarded at Agricultural shows (like Easter show) and Albion Park Show.

The four streets are as follows: 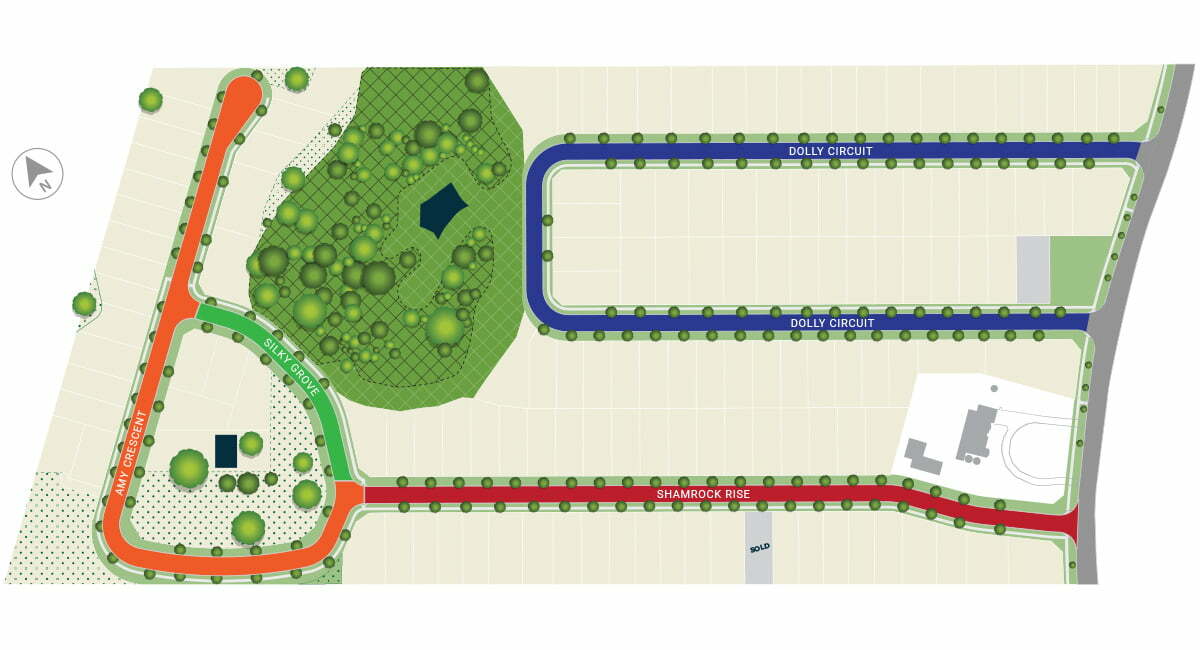 These street names have now been selected and endorsed ‘in principle’ by Shellharbour Council and the NSW Geographical Names Board consistent with rural theme used by Lend Lease within Calderwood Valley.  A submission has been prepared and sent to the for approval by the Board.